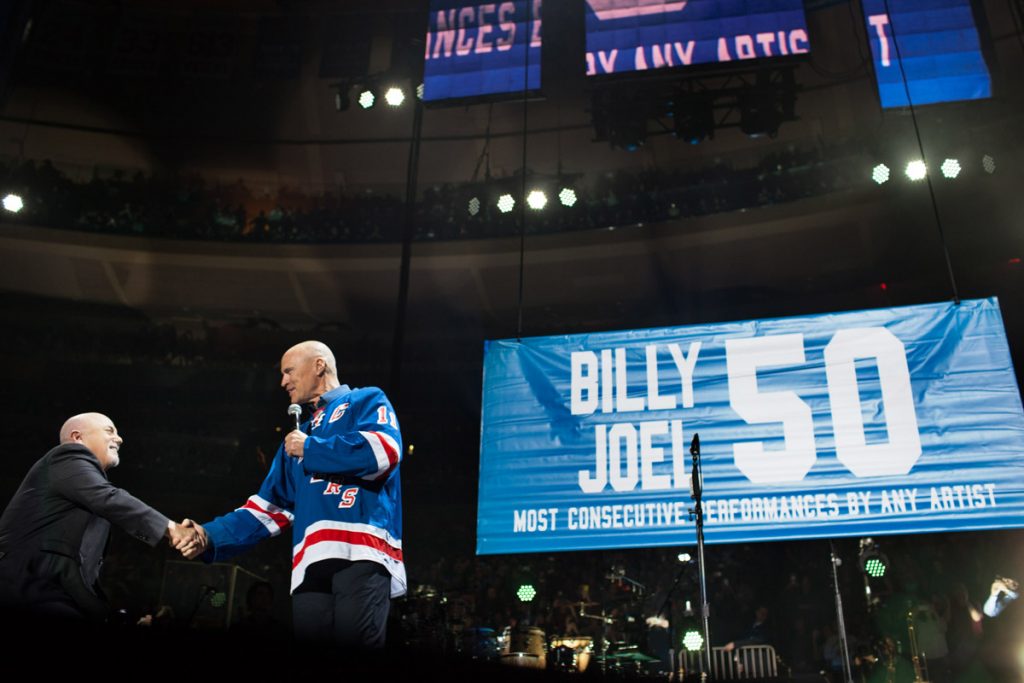 Billy Joel celebrated the 50th concert in his record-setting run at Madison Square Garden with an energetic, grateful show. “I don’t believe this,” Joel said, after a banner commemorating the event was raised to the rafters by Rangers legend Mark Messier. “This is nuts.”
… [Joel] was in such fine voice that he was hitting higher notes than in some of the originals, like an instrumental version of “Easter Parade,” and comedian Jim Breuer taking the lead in a version of “You Shook Me All Night Long.” There was also a bit of “Tears on My Pillow” to introduce “The Longest Time.” … In recent months, the scramble for Joel tickets has been more intense four years in than when he started. Shows are now scheduled through October, with Joel marking even more milestones along the way, including the 100th Garden performance of his career in July and the millionth ticket sold in the residency. – Newsday

Early during his set, Billy was joined on stage by another MSG veteran and NY Rangers legend, Mark Messier. The 15-time all-star was there to present Billy Joel with his very own commemorative flag to honor his 50th consecutive concert, which is the most consecutive performances by any artist. … Interacting with The Garden-goers, the Long Island-native spent the evening playing several games of Fielder’s Choice. … A few of the winners were “She’s Got A Way” (over “Everybody Loves You Now”), “All About Soul” (over “No Man’s Land”), and “The Longest Time” (over “An Innocent Man”). – The Nocturnal Times

“This is our 50th consecutive show at The Garden. I want to thank you guys for buying the tickets,” he told his dedicated fans. “It’s not like I’m the most glamorous rock-star.” … He threw some doo-wop in the mix, where he and his band members joined him on “The Longest Time,” with a sold-out venue of fans, serving as his background vocalists, during this fun singalong tune. Joel took his fans back to 1973 to his Piano Man album with “Stop in Nevada,” and it was followed by a trip to “Allentown,” the latter of which was a breath of fresh air. – Digital Journal