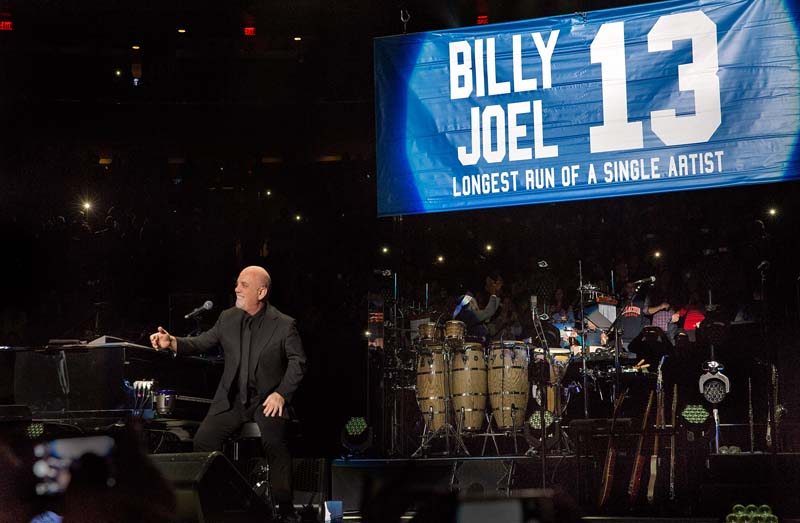 Only Billy Joel would think about celebrating a history-making moment and his name being raised to the rafters of Madison Square Garden with a song about fleeting music business success and artistic paranoia. Of course, that’s exactly what he did Friday night as he broke his own record for the longest run of consecutive sold-out shows with the 13th concert in his current residency. (He will continue to break this record, as he currently has shows at The Garden lined up through October with no end in sight.) Following a short award presentation by Q104’s Jim Kerr — who told the crowd, “You are participating in a historic, major musical event” — a new banner bearing Joel’s name, the number 13 and the title of “Longest Run of a Single Artist” was hoisted to the rafters. Joel and his band then launched into “The Entertainer,” with the famous line “I won’t be here in another year, if I don’t stay on the charts” and a litany of still-accurate pitfalls in the music business. – Glenn Gamboa for Newsday

Joel has not released an album of new songs since 1993's “River of Dreams,” but his voice is holding up well, and he is still capable of being boisterous onstage when the material calls for it. He's 65, but retirement does not seem to be in the cards. There have been some guest stars at the previous monthly Garden shows, including Sting, John Mellencamp and AC/DC's Brian Johnson. There were none on this chilly January night, though there were some minor surprises, including “Blonde Over Blue” (a little known track from “River of Dreams”) and a bit of “Don't Be Cruel” interjected into the song “The River of Dreams” (in honor of the 80th anniversary of Elvis Presley's birth, Thursday). Joel's vocals on “Sometimes a Fantasy” were also reminiscent of The King, perhaps as a conscious tribute, but maybe just by coincidence. – The Record 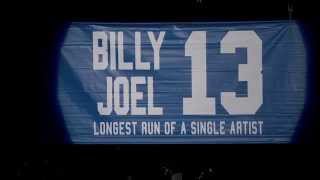