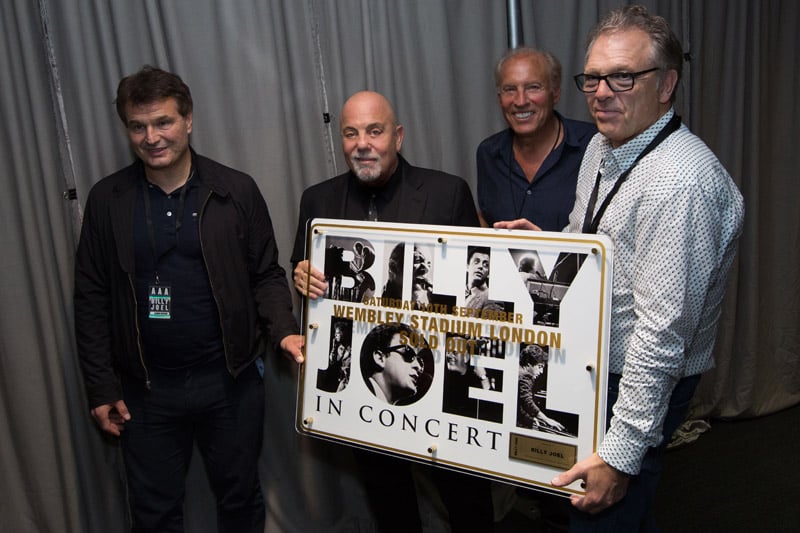 Billy Joel has a stealthy lure. Unlike at Rihanna’s recent Wembley show, the stadium was packed. To sell 70,000 tickets to a single concert almost 25 years after your last proper album is astonishing enough. But, more importantly, under rapidly clearing skies, Joel spent two and a half hours staking his claim to being one of the most talented and evocative singer-songwriters of his generation. – The Telegraph

What can’t go amiss here is that Joel’s voice is still record-quality perfect – not a note was missed, not a note was forced. It was effortless and easy, and proved just why he is celebrated as much as he is. The Rock and Roll Hall of Famer continued going through his archive performing hit after hit, with the likes of “The Entertainer,” “Zanizibar” and “Vienna” coming up next, spliced in with a version of “My Life” mixed with “Rule Britannia,” something that went down extremely well at Wembley Stadium, home of the national football team. – The Independent

He relies on old-fashioned crowd participation, with “fielder’s choice” moments, where the audience choose which of two songs they would like to hear. It’s a gimmick that makes a stadium feel like an intimate club, and airs unlikely gems including the experimental jazz of “Zanzibar,” the Kurt Weill-influenced “Vienna” and doo-wop homage “The Longest Time.” Uniting the disparate styles is Joel’s sublime and surprisingly evergreen voice. It glides through subtle classics like “She’s Always a Woman” and “Just the Way You Are,” turning world-weary for “New York State of Mind,” the years erased with every warm, distinct note. But Joel’s just as good on edgier songs, snarling through “My Life” and “You May Be Right,” with “Scenes from an Italian Restaurant” an impressive tour de force. – The Guardian

Not many shows at the gargantuan Wembley — a “Frankenstadium” in Joel’s words — dare to employ self-deprecation. High-tech gallimaufry and gee-whizz pyrotechnics are the usual fare. But the Bronx-born singer-songwriter, or “songwriter who sings” as he prefers to call himself, made the space seem like an outsize version of the Los Angeles piano bar where he played as a jobbing musician, which inspired his 1973 breakthrough album Piano Man. The setlist was as well timed as the wisecracks. Best-loved songs from Joel’s 150m records-selling catalogue ran like a spine through the performance. – Financial Times

He remains in fine voice, especially on the vibrant doo-wop of “The Longest Time,” and his patter is fine-tuned. …”Uptown Girl,” “She’s Always a Woman” and “Just the Way You Are” were indelible reminders why Joel need never work another day in his life. That he donned his suit and tie and went to his office one more time was reason to be grateful. – London Evening Standard

Billy Joel, born in the Bronx, schooled in Manhattan piano bars and hailed for his glamorous but intimate evocations of Big Apple life, is the ultimate New York singer-songwriter. That’s why it was a little odd seeing him pack out Wembley, even if he is one of the most popular artists in history. He was so relaxed, with such an ultra-professional routine that included jokes signposted by drum rolls and a handful of well-worn cover versions, that it felt as if we were watching a cabaret show. – The Times

Joel’s hallmark is commenting on the human condition, be it global or individual, consistently setting his perceptive wit to sensational melodies. The lyrical vista that is the anti-love song canvas of “Scenes From An Italian Restaurant” (accompanied by an exquisite video projection of hand sketched views of Manhattan’s Empire State Building as seen from the island’s Little Italy) offered, as always, the most honestly painful dissection of a relationship. Elsewhere, “We Didn’t Start The Fire” (again, with sensational graphics referencing each of the song’s lyric) nailed post War global history: political, social and musical, in under five minutes. – Jonathan Baz Reviews 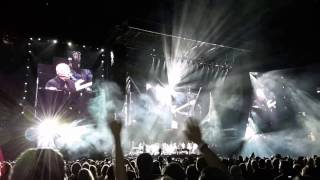 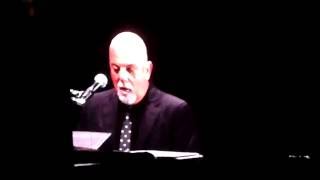 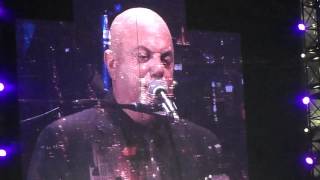