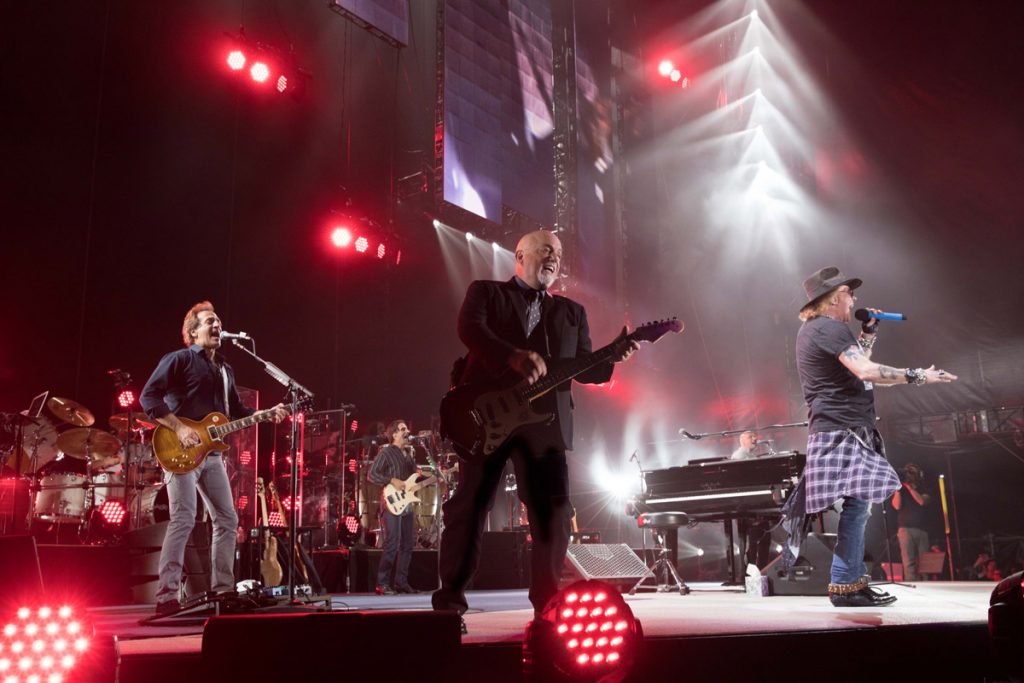 Billy Joel made his Twin Cities debut at the old Marigold Ballroom in downtown Minneapolis in 1974. He played the first concert ever at Target Center in 1990. And on Friday he played his first outdoor concert in the Twin Cities at Target Field. … Axl Rose of Guns N’ Roses joined a guitar-wielding Joel for a rollicking cover of AC/DC’s “Highway to Hell.” … Other high points included a harmonica-punctuated singalong “Piano Man,” the spunky “Big Shot” (featuring Rose again) and a heartfelt “New York State of Mind,” on which Joel demonstrated the range left in his voice — nuanced, belting, high notes and low notes. – Star Tribune

His performance Friday was big, energetic and loud, much more so than the last time we saw him in May 2015, across the street at Target Center. The sold-out crowd seemed to feed off that energy, as well as the gorgeous summer evening. The only complaint about playing outside came from Joel, who was dressed in a full suit and tie. He kept a fly swatter atop his piano and told the crowd at one point he wasn’t worried about getting bitten, he was worried about inadvertently swallowing a fly. – Pioneer Press

Joel reminisced about his earliest shows in town, at the Marigold Ballroom (formerly on Nicollet and Grant), a venue more suited, he said, to Lawrence Welk, before the obligatory winter weather quips led into a Minneapolis-acknowledging instrumental jaunt through “Love Is All Around.” … There were bits of “The Lion Sleeps Tonight” and “Mama Told Me Not to Come,” “You May Be Right” veered into Led Zeppelin’s “Rock and Roll,” “River of Dreams” flowed into Motown for a bit of “Heat Wave,” Joel even perfectly recreated the Beatles’ “A Day in the Life” in its entirety. – City Pages

While it makes sense for Rose, the substitute AC/DC singer, to deliver the band’s 1979 classic, Joel has actually been performing “Highway to Hell” during his main set for years, with his roadie “Chainsaw” tackling lead vocals. The Rose-Joel redux was thanks to some fortuitous timing: Guns N’ Roses’ latest North American leg of their Not in This Lifetime tour brought the reunited rockers to Minneapolis’ U.S. Bank Stadium on Sunday night. – Rolling Stone