Welcome in the New Year with 20,000 fans and a performer whose music — and performance ability — never gets old.

“Joel sounded as powerful and vibrant as he did when he sold out show after show after show at venues like Philadelphia’s Spectrum in the 80s. The BB&T Center was sold out as well — filled not only by fans who likely saw him in the 80s, but their kids, too. Joel is one of those rare artists whose music truly spans generations. … Billy Joel may be the elder statesman of rock/pop at this point, but he’s an elder statesman who leads by example. He knows what he’s doing, clearly respects his audience, and is still having fun,” says Boca News Now.

Billy Joel was clearly delighted when announcing that his daughter, Alexa Ray, got engaged hours earlier and that he had a great year with a 2-year-old and a 2-month-old at home.

He opened with “Miami 2017,” rocked out his many hits including “Only The Good Die Young,” “Scenes From An Italian Restaurant,” “Pressure,” “Zanzibar,” “Allentown,” “An Innocent Man,” “We Didn’t Start The Fire,” and “River Of Dreams,” plus deep cuts including “All About Soul” and “Stop In Nevada,” and yet incredibly — after his 3 hour set — the audience realized he only scratched the surface of his body of work. 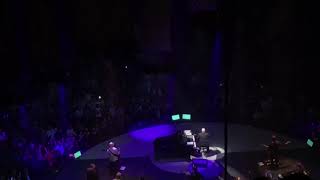